If there is one grouping of words you don’t know how to react to it’s “I had a dream about you.” I guess it’s story time…

Yesterday, Martha (Mission Doctors Association) and I made the trek up the hill to the Archbishop’s house to meet with Fr. Michael and check on the package my mom sent me. In regards to us, his job includes getting our residency paperwork in order. As we approach September, we have to start collecting copies, CVs, stamps, and signatures so we can get our passports sent into Yaoundé. One of the things we had to do is journey to public security to legalize our passport copies. Here, those legalized copies can be used at checkpoints and such.

Back to the story… Not even a quarter of the way down Big Mankon (it’s the hill I live on), the heavens open up and buckets start to fall. We’re already outside. We have our raincoats and umbrellas, and at the bottom of the hill, we can hopefully hail a taxi…if they can see us through the wall of water.  The rain lessened just long enough for us to find a taxi, climb in and go. I was sitting in the “death seat”—I mean seat of honor—so periodically, I had to wipe the condensation off the inside of the windshield so our driver could see the road. When we got out of the taxi, I was thankful I had worn my willies. The water on the side of the road was past my ankles and it was still falling.

Public security looks exactly like you’d think. There is a massive wall surrounding the building with a gate…just one. The woman sitting just inside directing people to the right door pointed us toward a doorway full of people. Looking inside and at the faces staring back, we didn’t have a snowball’s chance in hell of getting in. Standing in the rain never hurt, right? Nah…well, until it started raining inside Martha’s umbrella…and then mine. Umbrellas are great! They’re wonderful, but when a proverbial hose is running full bore right onto the umbrella’s thin nylon, it leaks through! Martha and I finally decide to make for a doorway that looks large enough to wait out the rain in. Come to find out, it’s…the main lobby? If you could call it that…There were benches, police motorbikes, a few doors, a walk up window and at least seventy people waiting for the rain to end. Martha managed to squeeze her way through the throng of people to the window. Catching my attention, she points down a hall. People were nice enough to clear somewhat of a path so I could follow. We stop at the entrance to “Room 4”. Two men are sitting behind desks looking bored, but they were really nice, taking our copies and beginning the process of stamping, signing and dating.

We’re getting ready to leave. We’re pulling francs out to pay for the legalization and watching the glue dry when a third man walks in. He looks at Martha, a huge smile spreading across his face, and says, “I had a dream about you and now you’re here!” Oooooookay… In some ways, it doesn’t sound as creepy in French, but still. Creep of the Week Award goes to… The man that signed our copies looks up from his desk, a serious expression on his face, but an ounce of humor behind his dark eyes and says, “Get out of my office! We don’t arrange marriages here!” Laughter. All five of us were laughing. We made friends at public security! She and I leave, walking back down the hall toward the hoard of people still waiting for the rain to end. The looks on people’s faces were a mixture of uncertainty and awe. It was as though the concept of laughter in the police station was taboo or something. How do you respond? What do you say? Anything? I just politely said excuse me, weaving through the faces and back out into the rain.

Side note: my package arrived yesterday. Five weeks almost exactly from the day it was sent. Fr. Michael emailed me to tell me it was in the mailroom. His email came not even twenty minutes after Martha and I left the Archbishop’s house yesterday… Seriously?! It looks like I’m making the trek up the hill again tomorrow! 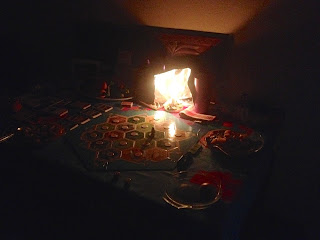 Ashley Hansen
I am a Lay Mission-Helper assigned to serve as a Teacher at Our Lady of Lourdes College in the Archdiocese of Bamenda, Cameroon for the next 3 years. I am from Padre Serra Parish in Camarillo, CA. I served in two domestic volunteer programs, one in Appalachia and the other in Detroit.